In the wake of severe windstorms on July 23 and Aug. 2, 83 of Whitworth’s trees had to be removed, either because they were torn from the ground or they posed a continuing danger to the Whitworth community. It was an unprecedented disaster — the perfect storm, groundskeeper Will Mellott said. 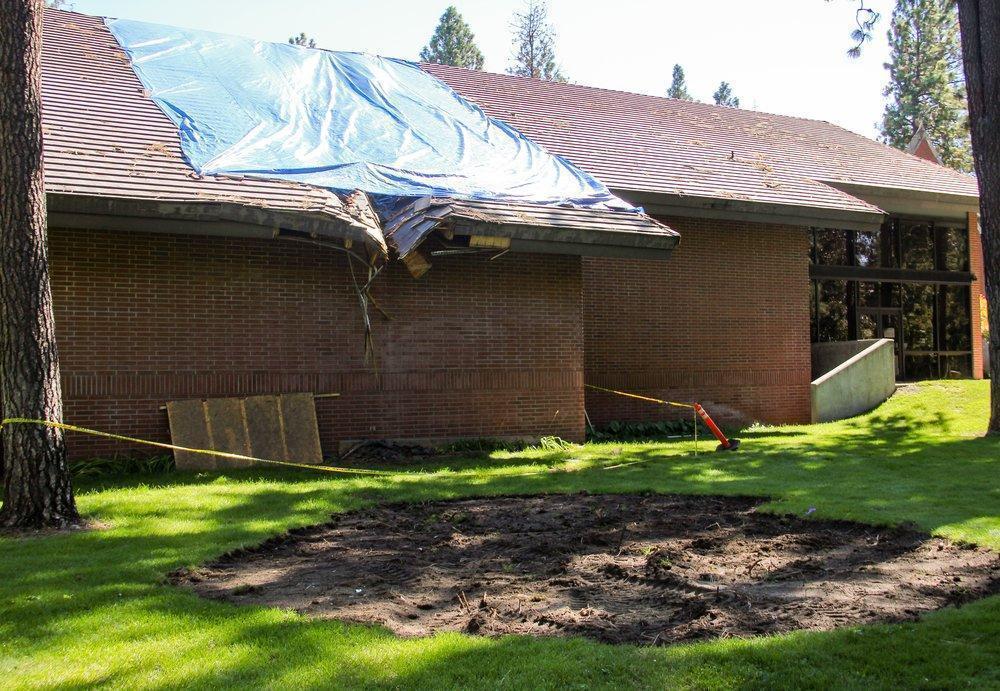 While the storm caused significant infrastructural damage, there were no injuries among those staying on campus during the storms.

The monetary cost of the cleanup process is estimated to be $250,000. Only $50,000 of that price tag deals directly with the cleanup and removal of trees, said Christopher Eichorst, the director of facilities services.

Besides the structural damage to buildings, much of the irrigation on campus had to be redone, along with the re-sodding of the damaged ground and the repaving of sections of the university’s sidewalks and concrete.

The structural damage to buildings has been repaired, with only the Kirsch House, a theme house on Hawthorne Road, being the most severely damaged property on campus. The Warren parapet has been fixed, after a tree 36 inches in diameter fell on the southern side of the building. Wind damage on all of the building’s rooftops has also been fixed.

Although the damage to campus was severe, Whitworth is not paying the $250,000 price tag entirely out of pocket. Many of the trees in the Loop and other landscaped areas around campus are completely reimbursable, Eichorst said.

The university’s insurance policy with the Educational and Institutional Insurance Administration, a non-profit insurance company serving a multitude of universities, includes complete coverage of structural damage and cleanup of fallen trees. One might call it “tree insurance.”

“We are insured as one university among a large group of others. This helps lower our insurance rate and deductible,” Eichorst said.

A major goal of facilities services is to replant all of the fallen trees with fresh saplings, Eichorst said. Many of the trees that fell or were cut down have been on Whitworth’s campus since its founding.

“Not all trees are created equal; I spent whole days in those trees, pimped them out, made them look awesome,” Mellott said.

Even though major windstorms are irregular occurrences, they still pose a danger to people on campus. However, there are no plans to remove trees that may pose a threat to Whitworth buildings and students.

After the first storm several inspections were done on the trees on campus to see if they were still structurally sound. By the time the second storm tore through Spokane many of the trees that were deemed dangerous remained untouched, while those unlikely to fall were torn from the ground.

“Neither of the storms discriminated,” Eichorst said.

Now that the storms have passed through the Whitworth campus, the entire dynamic of groups of trees have changed, Mellott said. Different problems arise in the trees with extreme frequency so it would be almost impossible to inspect the trees on a continual basis. For instance, when exposed to wind storms the trunks of completely safe trees will twist and morph, making them dangerous.

The danger of falling trees and their costly cleanup is something that simply comes with the territory, Eichorst said.

“Trees are a part of the Whitworth identity,” he said.

Although this disaster was unprecedented, the Whitworth community must remember that the safety of students, faculty and those that make our Whitworth experience possible is foremost in the minds of Facilities Services and the cleanup process, Eichorst and Mellott said.

“We value our trees, but we value the safety of our Pirates above all,” Mellott said.