Marriage has existed in various forms in major and minor religions and cultures across the world. The historical motives for marriage are a diverse and sometimes atrociously depreciating account. But what exactly makes two individuals married? Is it a religious ceremony, personal feelings or a legal certificate? 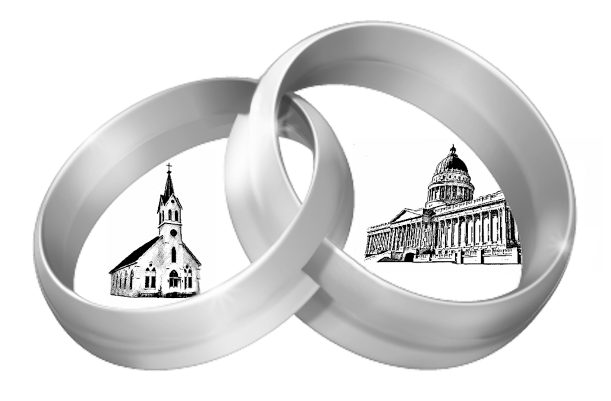 Prior to the 1184 Council of Verona, “marriage vows did not have to be exchanged in a church, nor was a priest’s presence required,” Shannon McSheffrey, associate professor of history at Concordia University, said. “A couple could exchange consent anywhere, anytime.”

People could marry simply by demonstration, agreeing to be and acting as a married couple. The religious ceremony serves to hold the couple together, both in their own eyes, the eyes of God and the eyes of the public. The ceremony is important, but that it should be the deciding attestation is fundamentally wrong. To argue that marriage—the affirmation of love—is legitimate only after a religious ceremony has taken place is to diminish the significance and gravity of love on a personal level, which is the root of modern marriage.

Conversely, the government does not legally recognize marriage if the civil element is omitted from the religious ceremony. Some have argued that the government has no right to regulate marriage because they consider it to be an extension of religion. However, placing marriage universally under government or religious regulation depreciates the importance of the individual in the act of marriage. Neither the government nor religion should have the authority to regulate the deepest emotions and relationships of private persons. Marriage must be freed from regulations and laws of the government in favor of acknowledging the individual rights and personal sovereignty of the parties involved in the marriage.

David Boaz, executive president of the Cato Institute, is a supporter of the privatization of marriage. In an article published in Slate Magazine, he asked, “Why should anyone have—or need to have—state sanction for a private relationship?”

His question is key to the argument of those who believe that marriage is, before all else, a private, personal relationship. In place of government regulated civil documents, he calls for privatizing marriage in a similar way to private businesses. The civil element would be replaced by a personalized contract, wherein the couple would define their relationship and its implications. “Contract” is an ugly word, but it is merely terminology. Marriage would remain marriage, both in function and name.

In terms of functionality, marriage would retain the financial and legal strength it currently holds. The personalized contracts would possess the same legal weight as contracts in the business world, any disputes of which could be brought before a court of law.

Marriage is a private union between private persons, and should be treated as such. Privatizing marriage would not devalue its significance and beauty or its function—it would promote both individual and religious freedom for all and remain the ultimate public symbol of love. Let those who desire a religious ceremony seek it out and those who don’t will have no need. Homosexuals will not be reduced to a “civil union” in place of marriage, without the government infringing on religious freedom by requiring opposed churches to officiate same-sex marriages—churches, synagogues and temples could create their parameters for the marriage contracts they would bless. Marriage has become the strongest declaration of love and the right to make that demonstration belongs to everyone.